Linguistic Memories and Record of Humans Seen from Brain

"There are rules in language not because human beings created language in such ways but because language follows natural order." This innateness hypothesis of language by Chomsky, notwithstanding the initial controversy it sparked, has been supported by recent brain science. With the accumulated results of experiments and the improvement of imaging technologies as exemplified by MRI (Magnetic Resonance Imaging), the analysis of brain functions has made exponential progress.

We have detected the center (grammar center) for processing grammars located at the frontal lobe on the left side of the brain. It has been also clear that as the learning of second language (English) grammar progresses, the same grammar center undergoes dramatic change. Besides this grammar center, the nerve required for understanding sentences has been found to exist at the frontal lobe not only in Japanese but also in Japanese Sign Language, gradually unveiling the "language map" in the brain. In this lecture, after gaining proper understanding of the "innateness" of language marked in the brain, let us think about the memories and record of language that are acquired after birth and stored in the brain. 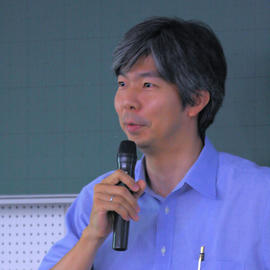 SAKAI Kuniyoshi
Associate Professor at the Graduate School of Arts and Science, Tokyo University. Doctorate of Science. Upon finishing his doctorate program at Tokyo University's School of Science in 1992, he became a Research Assistant at the First Department of Physiology at Tokyo University's Faculty of Medicine. After serving as a Research Fellow at Harvard Medical School in 1995 and a Visiting Scholar at MIT in 1996, he has served in the present position since 1997 (Assistant Professor and Associate Professor). He received the 56th Maichich Award for Print Culture with The Brain Science of Language (Chuko Shinsho) in 2002 and the 19th Tsukahara Nakaakira Memorial Award in 2005. His areas of research are brain science of language and brain function imaging. He is aiming toward scientifically clarifying the human nature through language.